Mount Athos in the third peninsula of Halkidiki. It consists of monasteries and other monastic institutions characterized as "Autonomous Monastic State".

All the monasteries of Mount Athos are religious and spiritual institutions designated as 'Major', 'Royal' and 'Patriarchal'. The monasteries are officially recognized by the church and state. Their number can not be increased nor alleiothei. The seventeen monasteries are Greek, one Serbian, one Russian and one Bulgarian.

Entry is allowed only in men, but everyone can visit it from the sea with boats and luxury yachts in daily cruises organized.

In Siberia in the open air amphitheater Cassandra which each year hosts various events of Cassandra festival in July.

The summer appointment on the hill !

To Sani Festival is a cultural festival, private initiative, with artists choices based on opinion, originality and pioneers. This is evidenced by the loyal audience, the great artist appearances and excellent organization.

In Sani Festival you can enjoy magical evenings on marrying cultural art and culture.

The cave of Petralona located about one kilometer from the village Petralona of Halkidiki. It is open to the public since 1979.

The cave was discovered by the Mars Paulianos traces of habitation Archanthropinae approximately 700,000 years, during the same estimate of the oldest European ancestors found so far.

The Mediterranean Cosmos is a large and modern shopping center. It has over 200 shops, 32 restaurants - cafe, super market, cinema, playground, church and a Greek village.

It is an innovative space with a huge variety of commercial, recreational and cultural activities.

A complete shopping town awaits you ! 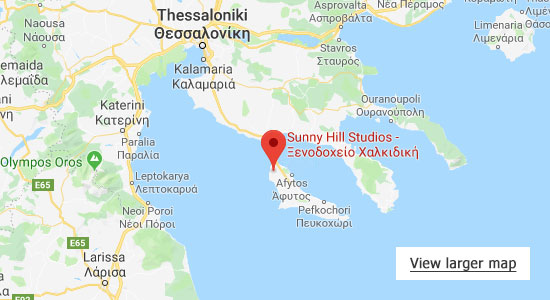